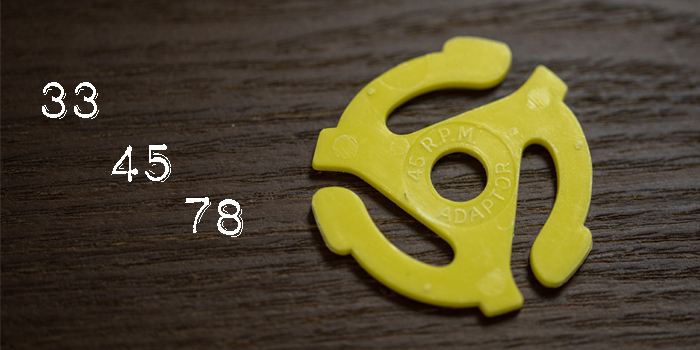 33, 45, 78. You may think –  are these related to the magical numbers from LOST? If you are a new comer to vinyl you may wonder what these numbers actually mean. Vinyl records typically come in three speeds: 33, 45 and 78 rotations per minute (RPM).

If you’re like most record lovers you’ve probably flipped speeds from time to time in order to hear your music faster or slower than normal.

It’s a funny little experiment, but what are there three different speeds to begin with? Each not only has a very specific reasoning behind the speed but the state of technology at the time of invention has much to do with the playback speed as well.

The Quest For Better Sound and Improved Playing Time

The slower a record turns, the worse the audio sounds. Due to this, in order to provide the best sound possible, the record needs to turn faster (higher RPM). However, when a record turns faster the amount of information it can hold on a record is reduced thus having a shorter playback time.

This is because more information pressed into the vinyl is read in the same period of time. The desire to improve sound quality and yet provide adequate playing time is an issue that remains to this day, but in the early days of audio recording it proved to be a major hurdle.

Thomas Edison invented the very first phonograph, which worked off of a hand crank. Due to this, a set standard speed proved to be impossible.

The average user hand cranked the device at around 80 RPM, yet the vinyl cylinders of the age could hold only five minutes worth of playback material.

The Creation of 78 RPM

Inventor Emile Berliner created the first true disc record in 1888. However, unlike the Edison model, his playback device used an electric motor. The motor played back a disc at times between 70 and 80 RPM.

As more and more audio manufacturers turned to producing record players, the idea of a 78 RPM turntable became the norm. This is because the 3600 RPM motor used within the turntable saw peak performance at 78.26 RPM.

Eventually, this became the official record standard by 1925. These early records had their short comings however. Not only were they limited in playback time (approximately 3 minutes per side) but also were quite brittle and prone to shatter as they were made of a shellac material. The size of disc varied over time with 10 inches eventually becoming a popular size.

Inventing the 33, Yet Few Used It

By the time 78 became standard, new methods of audio recording had emerged. This allowed for more information to be printed onto a smaller record without losing any fidelity. Printing records capable of playing at 33 RMP proved to be financially desirable for record companies.

Not only did smaller records suffer less damage but the discs could be printed for less. However, right as the 33 standard emerged, radio proved to be the basis of listening entertainment. Consumers did not need to purchase expensive records.

They could simply listen to the radio. The 33 RMP records stayed in production during this time, but audio studios were the primary user as it took up less room and cost less.

The 33 did not make any real impact on the consumer market until 1948. At this time, Columbia Records began selling a 33 system. It marketed the device with the ability to playback entire classical music performances and symphonies without having to flip the disc over.

Format wars is nothing new in the audio and video department. From VHS vs. Beta to Blu-ray vs HD-DVD, companies have often put out competing formats. RCA, which failed miserably in the 1930s to release a 33 to the public went out to release a 45 RPM.

The record was smaller than the other options. Ultimately, RCA released the format in order to directly compete with the Columbia Record 33. The 45 of the time did not provide much in terms of an advantage over 78s, and Columbia’s system could play both 33 and 78, so few manufacturers picked up on the 45s.

While the 45 didn’t provide any real benefit over the 78, it was a smaller size. So, by the early 1950s, nearly all record manufactures focused on systems that could play both the 33 and the 45. The 78 more or less dropped out shortly after the conclusion of World War II.

The faster a record spins, the better it sounds. With that in mind, there is only so much a record can play. This ultimately proved to be why the 45 outlived the 78. Of course, everyone has their own listening preferences, so there are still fans of the 78s.

All three speeds though have played an interesting role in the development of enjoying audio at home. There are certain limitations to certain speed records in how they are produced impacting their playback.

Not all record players can play 78s. In order to play a 78 many turntables require special needles or alteration to be able to play at 78 RPM. For those vinyl collectors who want the ultimate freedom of playing all of their records they can opt for an all-in-one record player such as the Electrohome Kingston 7-In-1 Vinyl Record Player

This will allow you to play virtually any commercially released records including 45 singles, 33 LPs, and the classic 78 RPM records.

Top 3 Things to Avoid When You Are New to Vinyl While vinyl may be old technology, it continues to attract new devotees thanks to benefits like better sound quality, the enhanced value of vinyl reco...