Arguably one of the most important inventions in the history of home entertainment; the record player has brought music into the home for over a century.

For many years it was thought of a long and dead technology. Made obsolete by CD’s and later digital downloads. Yet this relic that was doomed to a fate of collecting dust in a basement or attic has risen from the ashes to become king once again.

This technology has quite the storied history. Record players have evolved across numerous iterations, starting with the early phonautograph, morphing to the turntable and reaching the modern vinyl version.

There has been a renewed interest in record players as vinyl music has grown in popularity over the last decade. Many covet analog music as it generates high-quality uncompressed audio. Others use their record players as it provides them with a feeling of nostalgia.

Let’s take a look at the record player’s history to help readers better understand the roots of this interesting music technology.

The first version of the turntable was created by Edouard-Leon Scott de Martinville. He created the phonautograph in France way back in 1857. Yet this device could not play sound back. Rather, it inscribed airborne noise onto paper for visual study. The phonautograph was mainly used in lab settings.

The Rise of the Phonograph

Thomas Edison invented the phonograph in 1877 and thus was known for who invented the record player. This device recorded sound and also played sound. It inscribed audio to tinfoil wrapped along a cardboard cylinder for subsequent playback. Alexander Graham Bell added wax to Edison’s phonograph design in order to record waves of sound. The result was referred to as the graphophone.

Emile Berliner took record players to the next level. He dubbed his creation the “gramophone” and secured a patent for the device in 1887. The gramophone was made of hard rubber and shelac before being constructed with vinyl. The gramophone is the basis of the contemporary record player. It interpreted grooves on flat discs instead of a cylinder. This is the point in time when records became necessary.

The first record player released to the masses in 1895. This gramophone record player was quite popular until the rise of radio. Though radio didn’t kill the record player, it certainly stole the spotlight for a while. Record players sold well in the 30s and 40s but didn’t quite hit a mainstream tipping point until a couple decades later.

Record players became extremely popular in the 60s and 70s when Dual released the first turntables to provide stereo playback. High-fidelity sound reproduction hit the scene and motivated countless people to add a record player to their home. The automatic high-fidelity turntable was an immediate hit in the early 60s. This was the golden age of record players. It was during this era that Electrohome released its famous space-aged Apollo Record Player along side their classic wooden stereo consoles. 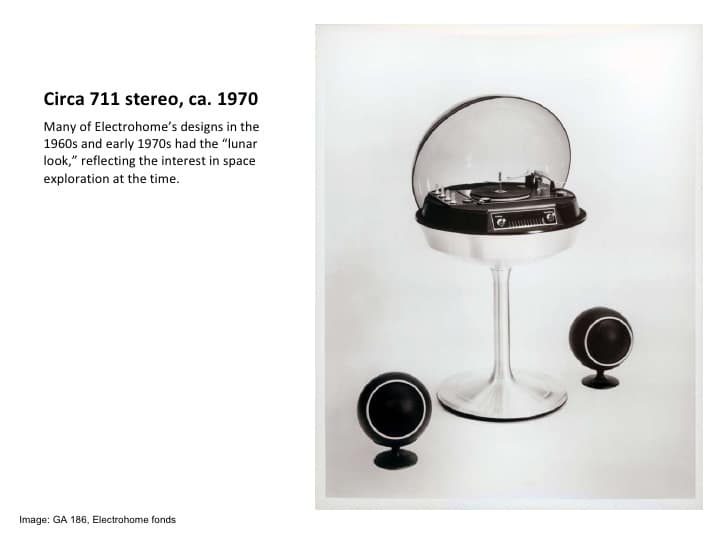 A New Use for the Record Player

Hip-hop DJs used record player turntables in a new and creative way through the 80s, 90s and beyond. They connected audio mixers to record players, guided their hands along the records so they scratched against the needle and produced a new rhythmic instrument of sorts. Though some people still use record players to play music, plenty of modern day hip-hop artists use record players in unison with mixers to add a rhythmic element to their music.

The Return of Vinyl

After years of the vinyl industry being sustained by hardcore enthusiasts and niche music audiences, vinyl has come back into the mainstream. Now being sold at major department stores, grocery stores and even giving rise to the birth of new independent record stores. Most major artists are now releasing their latest albums as LPs allowing generations young and old to experience this 100 year old technology in their homes today.

This increased interest in vinyl has resulted in a need for modern day record players. Many music enthusiasts or casual music listeners want to experience music on vinyl, while also wanting some more modern features such as USB recording, or connecting their smartphones and tablets to music systems so they can enjoy their entire music collection.

It’s clear that record players are here to stay.

History of the Phonograph The development of turntables and record players has changed throughout history. New innovations and designs allow improvements that carry forward and...
Electrohome’s Top 10 Artists from the 1980’s Here’... The results are in and the people have spoken. The King of Pop, Michael Jackson, has officially been named as the best artist of the 80’s, according t...
Electrohome Kinsman Jukebox Featured on the Price ... https://www.youtube.com/watch?v=4PxbO5NE6IU Find out which lucky contestant travelled back to the glory days of rock and roll with the Electrohome ...